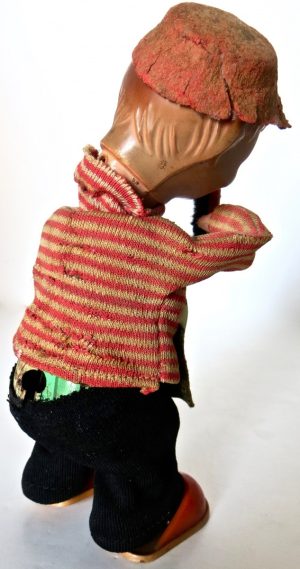 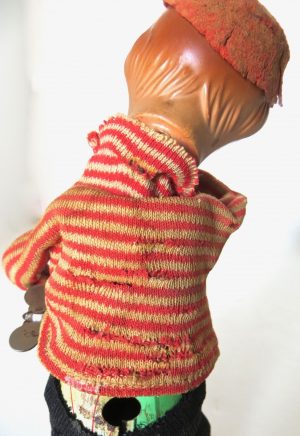 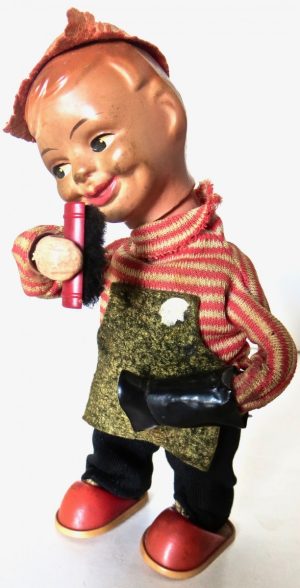 This is a very rare toy that I have not seen an example of before, and judging by it’s action and appearance, I would venture to say it is post war, probably made in Japan for the American market (boy looks very American). I have called it “Smiling Boy Polishing Boots” which resembles the clockwork movement. To operate: hold the toy in the left hand with thumb on chest and then; wind up attached original key with the right hand several times; and release. With a smiling face, the boy will roll his head back and forth, while diligently shining his black boots, using an up and down motion with his right hand. The toy works quite well and will go on for some time. It is made up of several materials. The head, hands, and shoes are made of composition; it has a tin body; the clothes jersey, hat, and “falling” trousers” are made of fabric. The toy is in good original condition; some wear to boy’s hat and jersey in back (see images), a slight “bend” to tinplate in the rear; but for the most part, the toy is very sturdy, works well, has a nice appearance, and wonderful charisma.
This is a charming rare toy that operates as it should, and is a “must have” for collectors of post-war vintage wind up toys; mainly because of it’s rarity, action and shelf appeal.