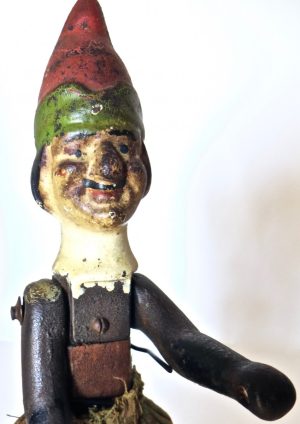 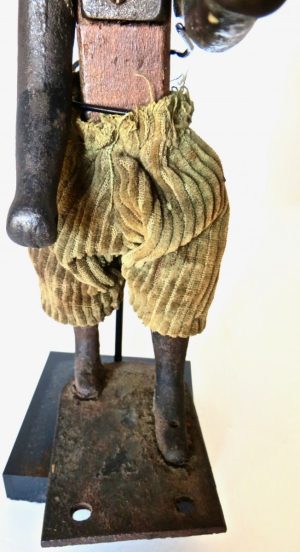 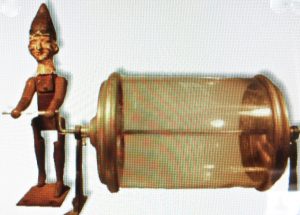 In all original clothing and condition, this very rare AUTHENTIC “Punch” looking figural, of American manufacture, would have been atop a popcorn maker of the late 19th century. He is affixed to the original iron base with two screw holes that would have held him in place on top of the mobile wagon-like popcorn making machine . Be very leery of an imitation version; it will not have the iron base attached to the legs. You cannot recast this figure without taking the base off. That base is 3″ long x 2″ wide and has a semi-circle to the back end.

Charles Cretor invented the popcorn maker, and acquired a business Peddler’s License in Chicago on December 2, 1885 to sell his popcorn from a street wagon. By 1893 he created a small clown and called him “Toasty Roasty”; he was positioned aside the popcorn drum and cranked a tumbler which churned out and dispensed the popcorn (see image of an example I located).
The first major display and introduction of Cretor’s popcorn maker with the figural attachment was at the 1893 Columbian Exposition. It’s widespread commercial use later expanded to movie theater lobbies, carnivals, circus events, and street fairs. Smaller wagons were hand pulled while larger wagons were horse drawn. The Cretor Company is still in business today.

“Punch” or “Toasty Roasty”, is in excellent original condition, wearing his original corduroy olive green pantaloons, and is in completely all original paint with no restoration and no touch up of any kind. It is important to be able to identify original paint and authenticity, as there have been several reproductions of this item. He is wearing a red hat with a green band; his neck is white and his arms are painted black. He is completely of cast iron except for a 1/2″ square of wood to his mid-section to where the pants are attached. Of particular interest is the fact that both of his arms and legs are articulated to simulate cranking the tumbler. I have him resting in a custom made stand (included) for display. This is a great item for the advanced toy collector or the “Punch” figure aficionado. I have dealt and collected toys for over 40 years and have seen an original example of this item only a couple of times before. It is from my own collection; I acquired it from Charles Klappert of San Diego in 1987—he was a noted mechanical bank and toy collector. Another original example is in the Cretor Company museum in Chicago, Illinois. Great item for somebody looking for something different and unique.