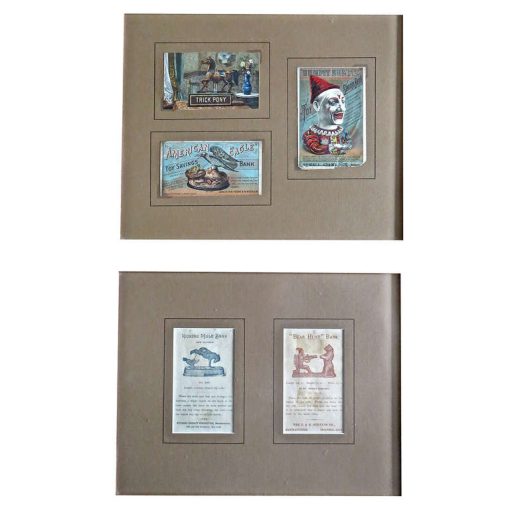 Five mechanical bank trade cards are displayed in two separate frames. In one frame are (3) polychrome trade cards, which the salesmen typically carried with them in a catologue to show potential buyers examples of banks they had for sale. Occasionally these were left with the wholesalers, but more often than not, the sepia tone cards were given away to potential buyers. The second frame has two examples of those trade cards.

The cards went into detail about the specifics of the bank, describing the subject matter, the action, and the cost. Also included was a colorful image of the bank.

The three polychrome trade cards in one frame are as follows:
1) “Trick Pony”. Excellent condition. No creases or folds.
4 7/8″ wide x 3″ high.

3) “Humpty Dumpty”. Fair condition. Colors are nice and bright but there are tears to the lower border, and a 3″ crease from half way up the right border down to the middle of the bottom border ending in a one inch tear. (see images).
3 9/16″ wide x 5 1/2″ high.

“Humpty Dumpty” is the rarest of these three cards, followed by “Trick Pony” and then “Eagle and Eaglets”.

The other frame has two sepia tone trade cards:
1) “Spise a Mule Bank” which is depicted as “Kicking Mule Bank”. Excellent condition. No creases or folds.
3″ wide x 5″ high.

2) “Indian and Bear” which is depicted as “Bear Hunt” Bank.
Fair condition with some discoloration and a horizontal crease in the upper third of the card. (see images).
3″ wide x 5″ high.

Provenance:
from the highly esteemed collection of Ferdinand Weider, who was the leading collector of mechanical banks in the 1940’s and 50’s.