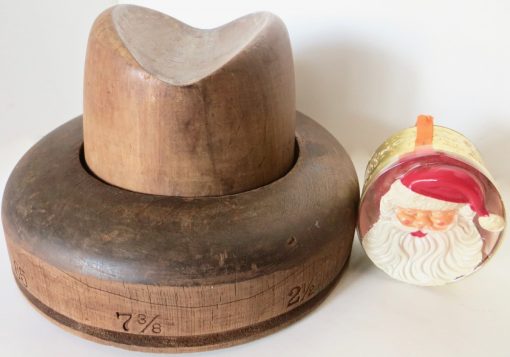 Also known as a “hat block” these forms were used by milliners to shape a cowboy hat by heating the beaver pelt up against the mold and pounding with a wooden mallet. John Stetson used this process in making the first cowboy hat in the 1860’s in his manufacturing plant in Philadelphia, Pennsylvania. These wooded molds were hand carved rather than turned on a lathe so that different and unique styles could be created. As John Stetson said after traveling extensively across the western United States “a cowboy hat kept the sun out of your eyes and off your neck. It was like an umbrella. It gave you a bucket (the crown) to water your horse, and a cup (the brim) to water yourself. It made a hell of a fan, which you need sometimes for a fire, but more often to shunt cows this direction or that”. That pretty much sums up the attributes of a cowboy hat.

I purchased a “Stetson” collection years ago from a collector very near Philadelphia, so this could very well be a Stetson hat mold.I know of no other millineries in the late 1800’s who were making western hats.

Wooden hat blocks are to be found, but it is rare to find a western hat mold, especially with the two pieces together, the brim and the head body and crown. They would have become separated at some point in time over the years. My example is being held together by brass “L” brackets which makes a great “stand alone”: display, or can be hung on the wall to accommodate hanging a cowboy hat. Markings on the base are:
4 1/4 7 3/8 1931 and H.G. (see image). “7 3/8” probably suggests the hat size and “1931” probably suggests the style or inventory number; “H.G.” suggests, perhaps, the actual name of the style. This hat mold is in very good and all original condition, very sturdy, and makes a nice presentation.

I have included a Christmas, Santa Claus Stetson salesman sample box. This is, in fact, a salesman sample, but more often than not, these boxes were used as a gift. Buyers wanted to purchase a Stetson hat for someone as a gift, but not knowing the size or the style desired by the recipient, a gift certificate for a certain amount of money was purchased and in exchange, this box with a plastic red hat inside, was given to the buyer to present as a gift. The recipient would go back to the Stetson outlet with his “salesman sample” gift box and pick out his hat. This little “salesman sample” is all original (probably from the 1950’s) and consists of an oval gold and silver decorated cardboard box with a hard plastic red hat inside, and a polychromed plastic top of Santa Claus, indicating that it was intended to be used as a Christmas gift. An orange ribbon completes the decoration.
Box dimensions: 4″ long x 3 3/4″ wide x 2 3/4″ high