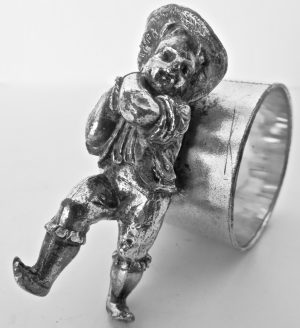 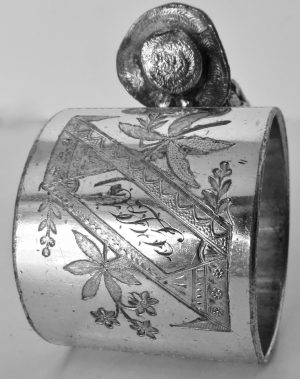 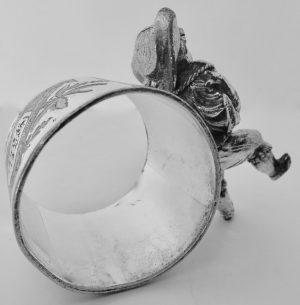 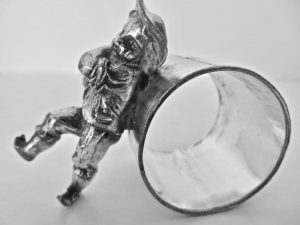 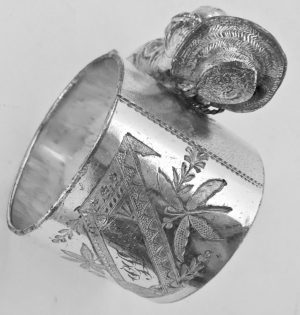 Though unmarked, this napkin ring was most certainly made by The Meriden Britannia Co. and came in two versions; one with a platform beneath the boy; this example has the young boy resting one foot on the ground pulling on the napkin ring. It is similar in appearance, and the figure is almost identical to the ring found on page 263; plate 647 “Figural Napkin Rings” by Sandra Whitson; the only difference being the upturned toe part of the right foot on this example.

The Meriden Britannia Co. was formed in 1852 by Isaac Lewis, along with three other partners in Meriden, Connecticut. The ring is circa 1885, the heyday of Victorian figural napkin rings. A floral design is etched into the ring itself (see image). Almost all of the original silver plate is intact and there are no repairs. The initials of the original owner of the ring are etched in script within a bordered band atop the ring.

Rings were used, not only for entertaining and special occasions, but also to identify each member of the family’s napkin, since the laundry was not done daily and the napkins were reused. Victorian silver plated napkin rings are highly sought after, and collectors often like to use them at dinner parties, matching up rings with the personalities of their guests.

Note: Please see my listings for other silver plate and figural napkin rings.