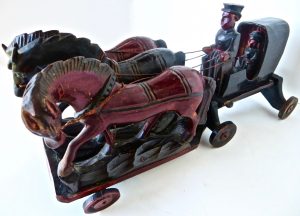 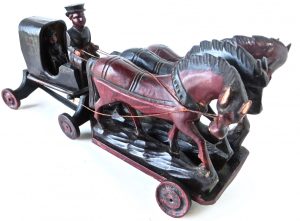 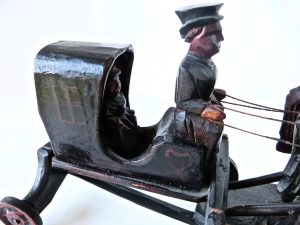 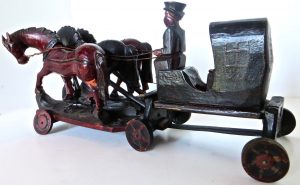 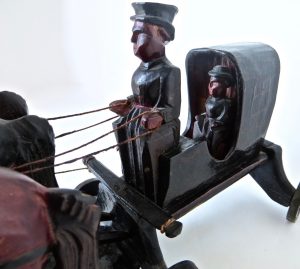 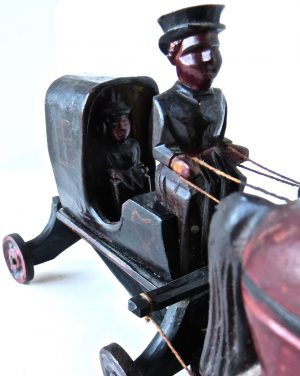 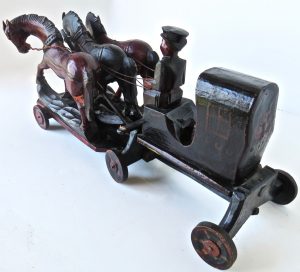 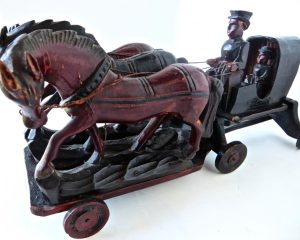 This is a hand carved wood prototype for a toy that would have been the model for a 19th C. cast iron or tin horse drawn hansom cab. It precedes the mold and/or the bronze pattern; probably American, circa 1890.

Prototypes would have been made for one of three reasons:

1) To be used as a model, along with a detailed description complementing diagrams for a patent to submit to the United States Patent office. Often times the actual toy was deviated from in production for several reasons, ranging from ease of manufacture and design, to practicality on the end use;

2) To make a mold for a bronze pattern from which cast iron examples would have been made for sale to the public (usually carved in separate pieces);

3) To conceptualize and create the idea for a toy either in tin or cast iron, from which a mold and pattern would then be created.

I have not been able to locate the exact toy for which this prototype was created, but there were many similar toys manufactured by Hubley, Lancaster, Pennsylvania;  Wilkens Toy Company, Keene, New Hampshire, and The Kenton Hardware Company, Kenton, Ohio, which closely resemble 19th century designs of cast iron horse drawn hansom cabs.

A hansom cab (short for “cabriolet”) was designed in 1834 by Joseph Hansom and was a horse drawn carriage such as this, with a low center of gravity for safety, manufactured for the purpose of transporting passengers. It was improved upon and became prolific in all major cities around the world in the late 19th century.

This prototype is in excellent condition; designed with two figures, a driver and a coachman; and is pulled by three beautifully carved horses on six original wooden wheels. It is in original condition and is stained in several earth tones; with a “hint” of red stenciling on both sides and rear of the coach, which was prevalent on early American tin (see image). The “string” reins also appear to be original.

Provenance: My own personal collection since 1988; acquired from and previously owned by Charles Klappert, La Jolla, California; a well known collector of mechanical banks and American toys.