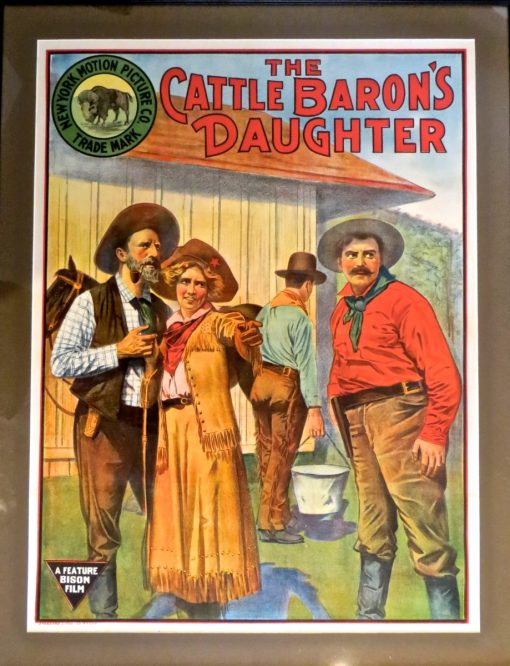 This movie poster is from one of the earliest movies produced; having been based on a novel written by Harold Edward Bindloss (bearing the same name “The Cattle Baron’s Daughter”) in 1906 and distributed by the New York Motion Picture Co. (see image with trademark on chromolithograph). I actually tracked down a hardcover first edition of that book “The Cattle Baron’s Daughter” and it is included with purchase of the poster (see three images). The New York Motion Picture Company was in business only a short time from 1909 until 1914, changing it’s name to the New York Picture Corporation in 1912. The movie was labeled as a “Feature Bison Film” with the bison logo (see image). The production company wanted to separate themselves from Thomas Edison and his movie production company, by attempting a higher standard production. The superb quality lithographed poster was subcontracted out to the “Standard Litho. Co.” also out of New York City. The litho is numbered “5041”. It is interesting to note that these early movies were New York City productions, and it was only a few years later that the trend and industry moved to California; Charlie Chaplain being one of the early pioneers in that endeavor.

Adam Kessel Jr. (1866-1946) was the founder of the New York Motion Picture Co. in 1909, but later merged with his rival “The Mutual Film Corporation” which a year later collaborated with Mack Sennet to form “Keystone Studios” which produced early Charlie Chaplain films.

The first American feature film “The Great Train Robbery” was made in 1903, therefore, this poster must be considered one of the earliest extant. Considering the fact that posters were on loan to the movie theaters and either returned to the studios or shipped to the next movie theater, subjecting them to much use; the excellent condition of this poster is extraordinary.
Because of the preceding, and later the paper drives during the depression, very few pre-1920 movie posters are to be found, especially in this condition.

Film posters were used and displayed outside of movie theaters early on, much the same as they are today. They advertised the movie being shown, using color illustrations of the characters in a film scene to attract movie goers.