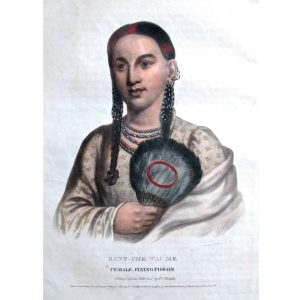 “RANT-CHE-WAI-ME” translates to “FEMALE FLYING PIGEON” which is indicated on this hand painted color lithograph, made by McKenny and Hall and dated 1837. It was published by E.C. Biddle in Philadelphia, Pennsylvania and is one of the many Indians (approximately 120) that are portrayed in the major work, “History of The Indian Tribes of North America, Volumes 1-3” by Thomas McKenny and James Hall (from the Library of Congress). Along with Catlin’s “North American Indian Portfolio” these are the two most important works of 19th century North American Indian study. McKenny’s work was based on his travel of the west in the late 1820’s. Thomas Hall was the “academia” member of the team. Charles Bird King painted the Indian portraits which hung in the Indian Gallery of the War Department. One by one the chiefs and other indians were brought in to sit for portraits. Other portraits were loosely based on another painter who had traveled with McKenny, J.O. Lewis. The book with the folios and hand painted lithographs was done in 1836. The significance of this is, that following the transfer of the paintings to the Smithsonian all of the paintings were destroyed in a fire in 1865. So all we have to chronicle those images are these McKenny-Hall lithographs.

Any complete versions of McKenny’s folio work are very rare and exist in a few private collections, museums, the Smithsonian etc. There are very few complete versions and most of the lithographs have been removed for framing to display as was this one. This is a first edition dated 1837 from the “History of The Indian Tribes of North America” by McKenny and Hall. One way to validate authenticity is that on most of the folios the print comes through slightly on the front from leaving it’s mark on the back of the page. Along with the folio, each Indian or scene was described in detail.

PROVENANCE: This particular lithograph has impressive provenance having come from the Sondley Library in Asheville, North Carolina. It had been bequeathed to that library by Forster Alexander Sondley (1857-1931). F.A. Sondley was a successful attorney who studied American history and geography and collected Civil War and American Indian artifacts. The seal of the Sondley library is impressed as a round circle on the lithograph.