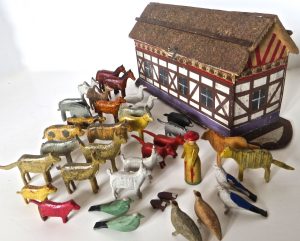 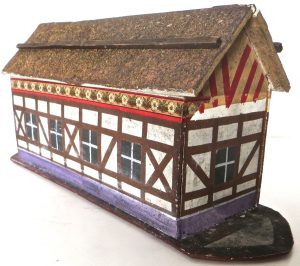 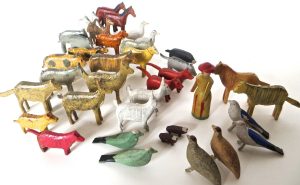 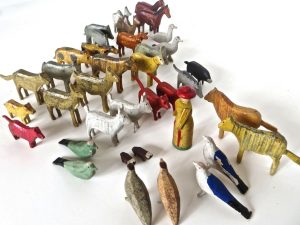 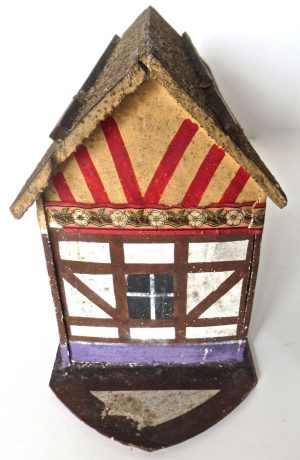 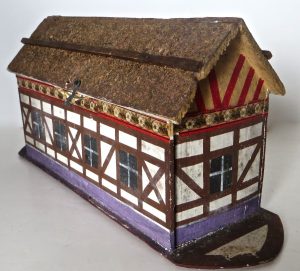 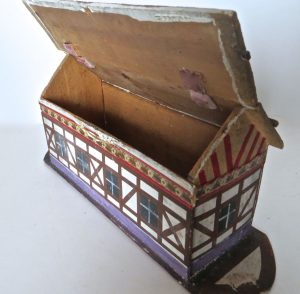 Offered for sale is a very traditional Folk Art item; a handcrafted Noah’s Ark toy with 37 hand-painted and hand-carved animals. The flat bottom ark indicates that it was probably made in the Erzgebirge region of Germany Circa 1890, which was known for that particular design and cottage industry manufacture. Typically there were no toy companies that made these items, which is why markings are not prevalent. A cottage industry type production would be more typical, whereby one family in a village carved the animals, another painted them, another made the arc and still another painted the arc. Or it could be more simple than that whereby an entire family (if it was big enough) participated in the entire manufacture.

Toy Noah’s Arks for children to play with were very popular in the late 19th century, and being of a biblical theme, they were a favorite toy to play with on Sundays. Noah’s Ark toys were sought after in America in the late 19th century. Consequently, many examples have turned up; especially in Pennsylvania where there are many towns populated by families of German descent.

This particular ark is all original, with a 1/2″ lithographed floral molding to the top border. The balance of the finish is hand-painted in colors of brown, cream, black, purple, and red. The complete underside is hand-painted in brown. A cork like applied brown finish to the roof is complemented by simulated cloth hinges. Animals may be stored in the body and accessed by the hinged top and closed and secured with a hasp and eye hook.

The hand-painted design to the ark is all original. The back side of the arc lacks the top 3 1/2″ of lithographed molding. There is very slight touch-up to a leg of an animal here and there (to be expected). Small Interior support blocks could be added (see image).