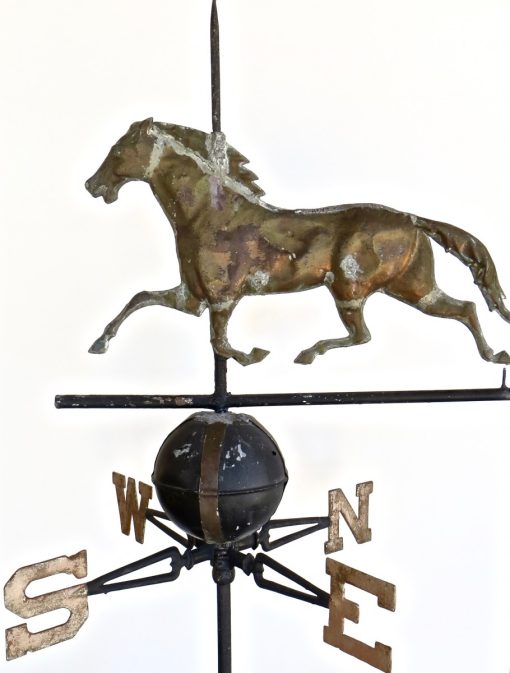 This “Ethan Allen” Running Horse weathervane was one of the more popular ones manufactured by the prolific copper weathervane makers of the late 19th century, “Harris & Co.” of Boston, Massachusetts. You can see it displayed in their period catalogue (see image of catalogue page) and described as “suitable for all kinds of buildings and made as to indicate correctly the direction of the wind”, also “These prices include vane, spire, letters, and balls” which are included with the purchase”, $17 being the cost at that time (No. 4 Old Pattern). The weathervane almost exactly resembles the catalogue illustration which can be found on page 151 of Steve Miller’s “The Art of The Weathervane”, and even comes with the original spire, the vane, the letters, and the ball, as stipulated on the catalogue page.

This late 19th century horse weathervane,  circa 1880’s, was aptly named and influenced, undoubtedly, by the real life horse named “Ethan Allen”; a popular horse made famous by his successes as a mid-19th century harness racer and sired in upstate New York by an equally famous stallion named  “Black Hawk.” Their images were immortalized by Currier and Ive’s lithographs at the time. Ethan Allen (the horse) was born in 1849 and attained fame in the 1850’s harness racing circuit as a champion trotter, covering the mile in a record setting time of 2 minutes, 25 seconds. He died in 1876 at the age of 28.

The three dimensional narrow full bodied, thin mold is made of molded copper; hand-hammered into place; with a molded head and copper tail. The copper has patinated to a faded copper shade and there are a few trace areas of verdigris. The condition is good, consistent with age and use, with a couple of soldered bullet holes and copious old re-soldered repairs (see images) that were probably done in place over the years, as needed, rather than a “contemporary” restoration, thus it maintains a very nice patina and overall pleasant appearance to the original copper surface; a wonderful piece of Americana.

The contemporary customized stand was made specific to this weathervane for stability and balance, and it displays very proudly and nicely resting on the floor as it reaches to 72″ from the bottom of spire to the top.

36″ height (top of horse spire to bottom of directional)

Provenance: It was found atop a fraternity house at Ohio State University in Columbus, Ohio in the 1960’s. I purchased it from that collector in 1992 and have had it in my collection ever since.