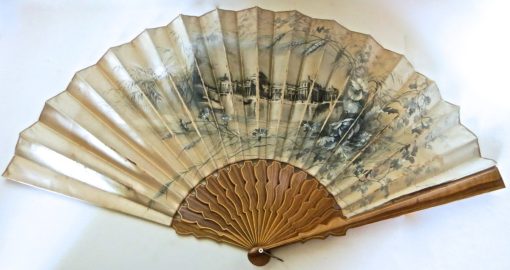 Oversized Hand Held fan with lithographed image on silk depicting “Agricultural Building World’s Columbian Exposition, Chicago 1893. Mekim, Mead & White Architects” as imprinted on the fan under the building, with a floral pattern above, below and to the side of the building. The frame and sticks are made of wood with a gold color embossed perimeter around each one. The fan was made in Japan specifically for the Chicago Exposition (or the architects). The condition of the actual structure, strength of colors on the lithograph, and wood frame is very good. All of the folds have some degree of separation albeit they are stable. Folds and unfolds with no problem. The value is in the rare World’s Fair subject matter and to those who collect unusual rare fans.
Dimensions: 16 1/2″ high x 30″ wide.

History of Agricultural Building
During the 1893 World’s Columbian Exposition, the Agriculture Building was in Jackson Park. New York architecture firm McKim, Mead, and White designed the sprawling edifice, which was 800 feet long and 500 feet wide, occupying approximately 10 acres in the southeast corner of the fairgrounds. More than 550 American companies and 33 states set up shop on the main floor. As part of the foreign exhibits, a gigantic cheese from Canada was displayed in the eastern portion of the main floor. Made by J.A. Ruddick of Perth, Ontario, the 22,000-pound cheese was six feet tall with a circumference of 28 feet. Its makers used 200,000 pounds of milk. Other nations’ agriculture on display included grains, jams, and beers from Canada; champagne, wine, truffles, chocolates, and pate de fois gras from France; a 50-ton chocolate statue of Christopher Columbus (also from France), a 38-foot high, 30,000-pound chocolate statue from Germany; hams, cheeses, beers, ales and teas from Great Britain; whiskeys from Scotland and Ireland; teas and silks from Japan; coffee and grains from Brazil; and coffee, tobacco and liquor from Mexico.