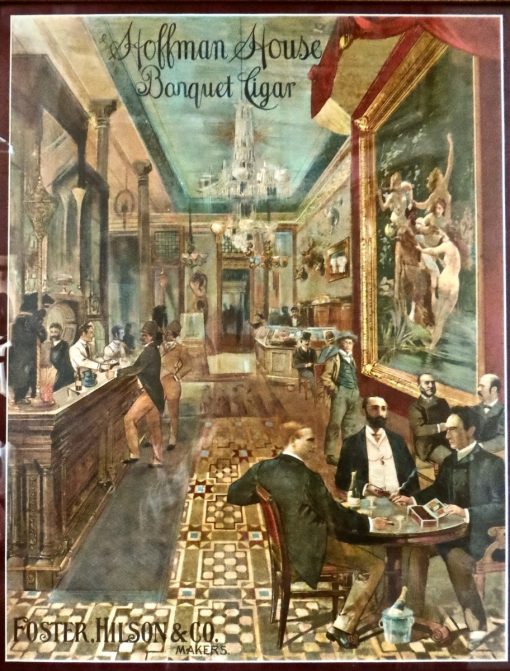 Probably one of a kind, this very rare hand painted lithograph image is advertising the world famous cigar and maker. I have never seen this image before in all of the years I’ve been dealing in advertising. This grandiose lithographed image has it all, with copious scenes and participants. Let’s start with what is being advertised; as printed at the top “Hoffman House Banquet Cigar”.

Chicago tobacconist, Edward Hoffman, started his cigar business with a small family run operation in 1857. By 1868 he had blended the finest tobaccos available and soon was known to be the maker of the finest cigars in the nation. His signature risque image of “Nymphs and Satyr” embodied his packaging and advertising, as evidenced by the over the top bar scene here in this lithograph with the nymph scene appearing on the wall to the right. The actual bar room lounge depicted here in this Hoffman lithograph is the late 19th century New York famed “Hoffman House Bar”, with all of it’s excesses and barroom accoutrements, gracing the walls and furnishings. Most noticeable is the size and height of the room with three elaborate chandeliers; a huge back bar mirror; and the oversized nymph painting with an ornate gold frame, further framed and topped with a velvet drape and canopy. Several other gas lights are attached to the walls. There is an intricate tiled floor pattern, and a fancy hand carved bar with a German black forest bear standing on top of the bar holding one of the gas lights in the foreground; probably influenced by Hoffman’s German heritage.

No less than fourteen people (all men!!) appear in the image. Most notable of those are the three men sitting at the table in the foreground smoking cigars (obviously Hoffman–note box), with champagne on ice underneath the table. President Grover Cleveland and Buffalo Bill were known to have frequented the “Hoffman House Bar” in New York City—truly a “gentleman’s” club.

By 1892 Edward Hoffman sold his company to his nephew Iwan Ries who owned the Foster Hilson Company, thus that name appears in the lower left portion of the lithograph “Foster Hilson & Co. Makers”. The company is still in business maintaining it’s residence in Chicago. Hoffman advertising images of “clothed” nymphs are of a later date and can be identified after 1900.

The lithograph is very handsomely framed in a bold, period gold leaf frame (see image), probably original to the picture; even has the original glass fronting it,  as slight wavy glass is evident. Perhaps since this is only one I’ve seen, maybe hung in the main headquarters in Chicago. Burgundy matte border and archival preservation additions to framing.

This is an iconic piece of Americana and advertising and is sure to please the discerning collector of same.