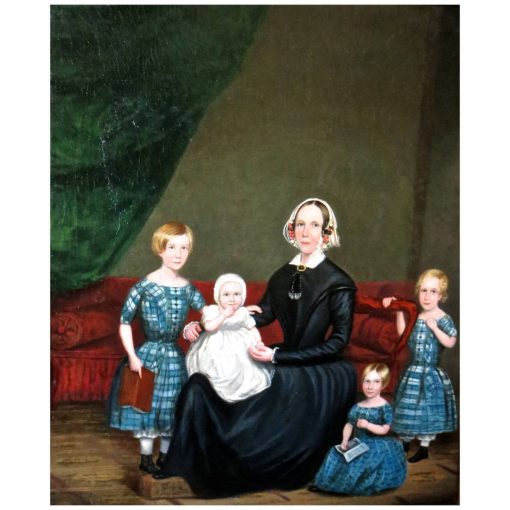 This American portrait descended through same family from 1830s until July 2012, when I acquired it from executor in Oregon. Early family had lived in New England. It is unusual to have so many subjects in the same picture, especially to have four children. The oil on canvas has so many attributes; it is quite an early picture (1825-1835), as is evidenced by the pleated upholstered skirt on the Empire sofa with rolled pillows on the ends; the sofa being used as a prop to place the subjects on and around. The clothing and matching attire of the children, and the elegant lady’s dress, with silk taffeta bonnet and jeweled necklace, attests to a well-to-do family. A book in the hands of two of the children tells us that the adults want us to know they are learned. The luxurious curtains, hand painted floor, and fancy furnishings, are typical of early 19th century (going from Regency to Empire), especially for the upper class. The hair of all the subjects is almost perfectly in place, so much so that one wonders if they actually all sat for the picture at the same time, which brings us to the point of attribution. It is with a reasonable degree of certainty, that this painting was done by S.V.D. Schans. A very similar painting was sold by Sotheby’s in the “American Folk Paintings and Watercolors Sale”, on April 30, 1981, in their New York galleries. It was lot# 38 (oil on canvas) entitled “Family Portrait,” attributed to S.V.D. Schans (19th century) from the collection of well known folk art collectors, John and Marjorie Schorsch.
The similarities in the painting are striking; multiplicity of children posed in similar attire to each other, holding books, hair in perfect place, posed around an Empire sofa, hand painted floor, luxurious curtain for a backdrop, similar expressions, and significant to note; all of the children in both paintings have identical eyebrows.

Unlike many early 19th century folk art portraits of children, the facial expressions in this painting seem comfortable, natural, and realistic (“Prior” like), versus a stoic or staged and sometimes out of proportion presentation of so many other portraits depicting children during this period.

American folk painting achieved it’s peak of popularity after 1800 when citizens wanted a symbol to record their newly achieved accomplishments in life. They wanted to express pride in their recently acquired status and preserve the moment for the benefit and amusement of future generations. The portrait was a way to document this in perpetuity.

The quality of this painting rests on it’s own merits and has all of the elements collectors of folk art look for; fine quality by generally untrained artists, charm, pleasing subject matter, some degree of provenance, an element of naivete, and in this case, a colorful presentation.

Condition is excellent with a minimal amount of inpainting; in the field only, not on the subjects.