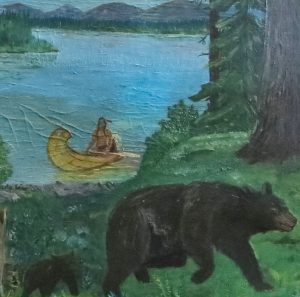 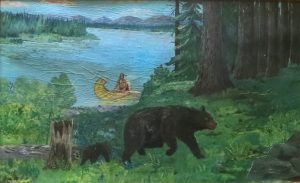 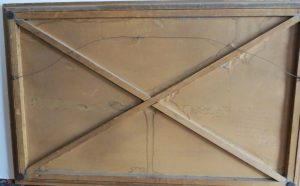 Dated “1848” in the lower left corner and signed “Elleroc”, this oil on panel represents an early Algonquin school of interest on behalf of the early Canadian artists (of which there were very few) in the first half of the 19th century, as the population of Canada was under one million inhabitants; and that of Montreal (where the painting turned up) less than 20,000.

The Group of Seven is often criticized for their depiction of a developed area as “pristine”, characterizing it as uninhabited.. The appeal of this particular painting, is that “Elleroc”, born circa 1820, when the population was scant and sparsely populated; and most of Canada was the “frontier”; would have portrayed images that he actually saw at the time, and reflected those in his paintings. Canadian artists have always been fascinated with aboriginal people of their land, and pre Confederation paintings were inspired by this subject, later being referred to as the Algonquin school.

The painting is mounted on panel and in frame measuring 24 ½” high x 38 ½” wide, while the actual painting is 22” high x 36” wide. The condition of the painting is excellent and there is no touch-up, tears, fading, or restoration.

The subject matter features an Indian in a canoe, pulling up to shore from the lake behind him and, presumably, startling the mother bear who runs off with her two trailing cubs. Gentle crazing attests to the age and authenticity, in conjunction with the signed artists name and date “1848”. Also of note(see image) is the hand written script of French writing to the rear of the painting which translated says;

“It was an old person who brought this painting to Emmaus, rue Charland in Montreal in July 1980, supposedly, it is +/- 140 years old, having been always in the family, her father last, her grandfather before, etc.”.   French is the dominant language in both Montreal and Quebec City.

There are very few surviving Canadian paintings from 1850 and earlier, as there were very few artists to memorialize the surrounding scenery and its inhabitants. Having been in only three collections in 175 years; the original family; the Montreal collection ; and then my collection—-the provenance, along with its age, condition, originality and subject matter, make this painting highly sought after by collectors of Canadian historical paintings.

Note: Before immigrating to England, my grandfather was a very poor man; a French Canadian, who as a young man, rode logs down the St. Lawrence River (Seaway) and was quite familiar with the Montreal/Quebec scenery at the turn of the century. I never met him but I can only imagine that this painting portrays some of what he might have witnessed.