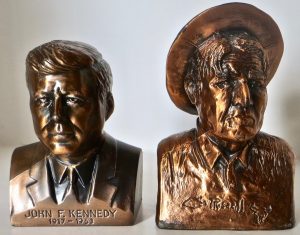 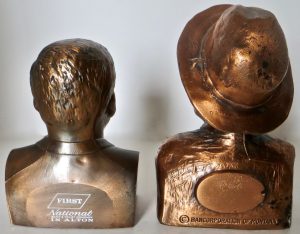 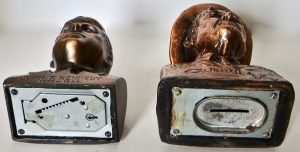 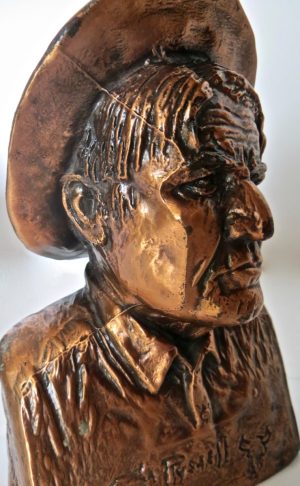 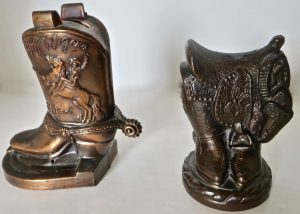 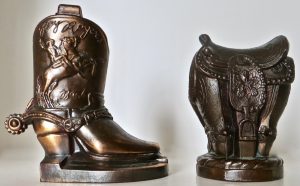 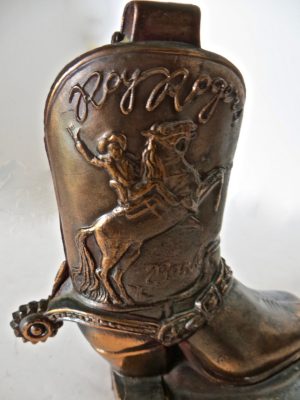 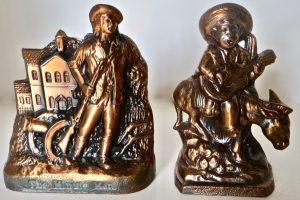 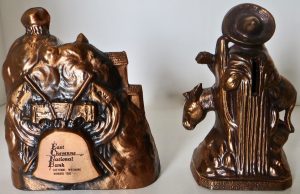 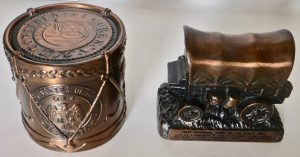 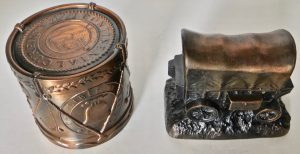 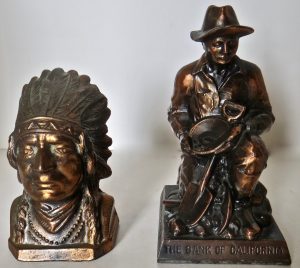 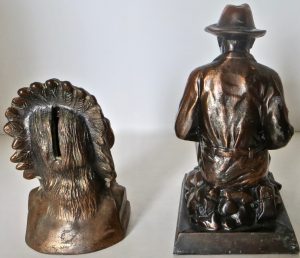 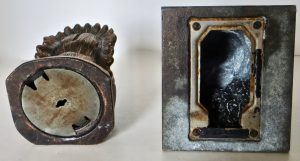 Banthrico, Incorporated (and similar companies) manufactured coin savings banks for banking institutions who used them as premiums to those who opened up a savings account. In the case of young children they were given to them to encourage thrift and savings. These (10) banks are a representation of that era 1950 to early 1970’s, encompassing patriotic and western themes. They were always made of white metal, and typically plated; usually in a copper finish.

5) “The Minute Man” by Banthrico, circa1976. Portrays Revolutionary War Minute Man with Bell and flags in back; canon and Independence Hall in front. 5 1/4″ high. “East Cheyenne National Bank, Wyoming” inscribed on back. Excellent all original copper plating and condition with original coin trap intact. Some discoloration to the base front where it says “minute man”.
Referenced #42 “Coin Banks by Banthrico” by Jim Redwine

6) “Mexican Riding Donkey”. Portrays a Mexican playing the guitar serenading those he passes in the countryside while riding a donkey. A cactus in back, and rocks on a hill in front completes the decoration. Copper plating is excellent and bank is all original; bottom plate is intact; round coin trap lacking (see image). 6″ high; circa 1960. Manufacturer unknown.

8) “Covered Wagon”. Water Barrel on side; storage trunk on the other side. “First National Bank of The Black Hills” inscribed on the side base plate By Banthrico, circa 1950s. 4 5/8″ high. All original and in excellent condition. Copper plating intact and original key lock coin trap in place.
Referenced #432 “Coin Banks by Banthrico” by Jim Redwine

Nice group of banks for someone who wants to start a collection or add to an existing one; or simply to give away and use as gift items. Great for young and old alike.

The Banthrico Company was established in Chicago, Illinois in 1931 with the concept of building savings banks or “piggy banks” for banking institutions. They were quite prolific and successful through the 1970’s but started to struggle and were bought out in 1985.