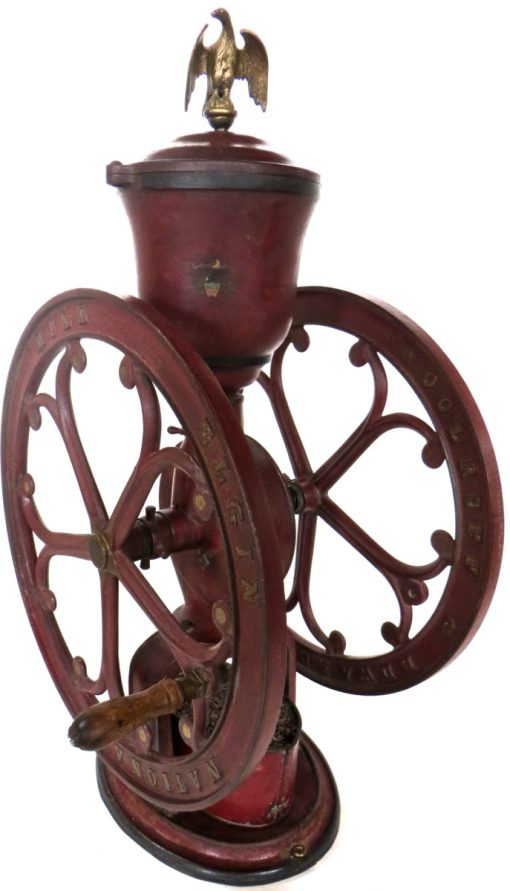 This all original turn of the century coffee grinder was made commercially for the grinding of coffee in large quantities, thus it would have been on a counter top in a general store or used in places like hotels and restaurants. It is a great example of Americana, manufactured by the “Elgin National Coffee Mill” (embossed on grinder wheel–see image), which later became the “Woodruff & Edwards Co.” (also embossed on the other grinder wheel—see image). They became quite ubiquitous with the popularity and copious importation of coffee for the middle class. Two holes provided in the front and back would have allowed it to be screwed into a counter top.

This is the large version (32 1/4″ high) #40 model, hand painted in red, with original paint and excellent condition with no restoration of any kind. It also has the original tin coffee receptacle at the base which is very unusual to maintain. That is also in it’s original red hand paint. The cast brass finial to the top of the hopper is original (see image) which is also typically missing, replaced or damaged.

To operate; slide the disc like top to the hopper over and pour coffee beans in the compartment; close; and then wind the wheels by the original wooden handle and the coffee beans will be ground dropping into the tin receptacle below.
Note the faint appearance of the black stenciling. This attests to the originality of the red paint.