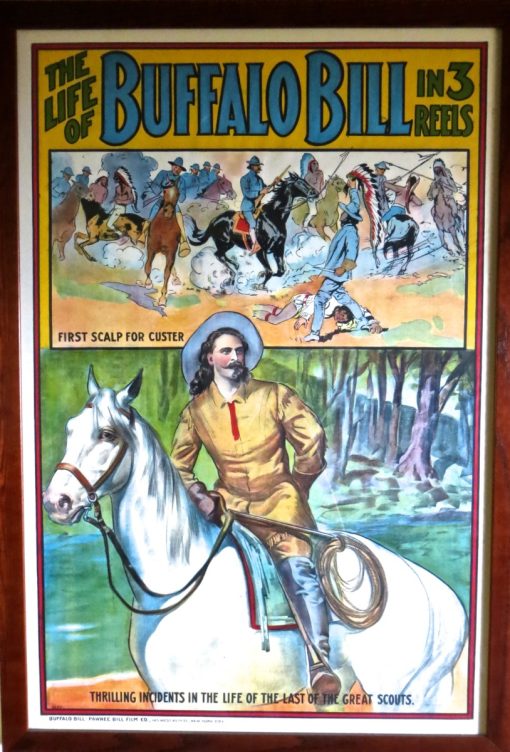 Authentic Buffalo Bill chromolithograph movie poster on paper featuring William Cody (Buffalo Bill) in the Three Reel film “The Life of Buffalo Bill”. This is one of the earliest American movies produced in the film industry, consequently this is one of the oldest posters extant. The movie reenacts the actual and historical Indian struggle between Buffalo Bill and Chief Yellow Hand in a fight to the death, in retribution for Custer, thus the slogan “First Scalp for Custer”; beautifully showcased in great detail and color in the upper third of the stone lithograph poster. The dominant pose of the poster is of Buffalo Bill sitting majestically on his white horse in full cowboy and buckskin regalia, with the western wooded background scenery.”Thrilling Incidents in The Life of The Last of The Great Scouts” also appears at the base of the poster.

The movie was made in 1910, and the poster created just after completion to promote both the movie and “The Wild West Show” that Buffalo Bill had created, produced and performed in with Pawnee Bill and real Indians he had befriended over the years. His show was performed extensively throughout the country and internationally with performances in Great Britain and other parts of Europe during the early 1900’s. For more specificity, see notes attached to the back of the poster (see image).
As a footnote it is worth noting that Buffalo Bill, as a teenager, was a rider for the Pony Express in the early 1860’s.

The poster is very large and in a handsome and appropriate 1  5/8″ wide quarter sawn oak frame.
Dimensions: 44 1/2″ high x 30 3/4″ (with frame)
41 1/4″ high x 27 1/2″ (poster only)
Professionally matted, backed, and framed in museum quality archival conservation materials.
The poster is in excellent, nearly perfect, all original condition, with bright colors and features.