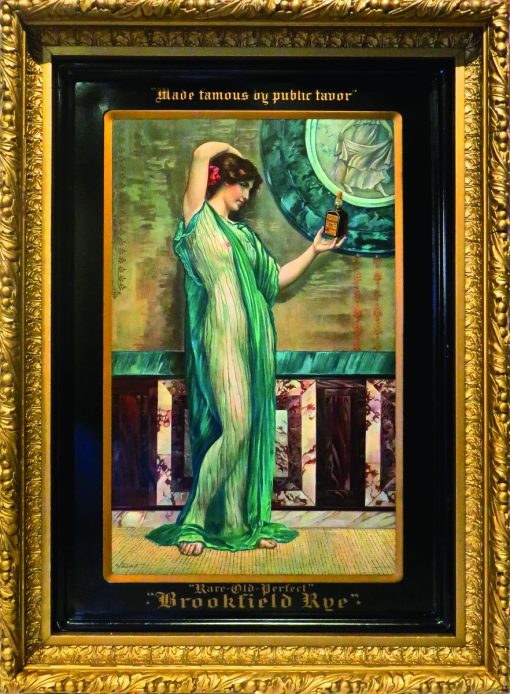 Beautiful semi-nude woman with translucent negligee, holding a bottle of “Brookfield Rye” whiskey is the focal point of this chromolithographic tin advertising sign, used to promote the purchase of named liquor; would have been intended to hang in a bar or saloon. Only a handful of these signs known; this one, possibly the best condition example extant. This particular example is made more desirable because of the authentic, period, bold gilt frame housing the sign. I do not know of another framed example. The colors are crisp, and the condition is about as close to mint as can be, with no flaws and completely original. The risque theme probably accounts for the sign’s rarity.

“Brookfield Rye” whiskey was the signature product made by The Bieler Company, which started operations in 1867 and morphed into “Geo. Bieler Son’s Company” Cincinnati, Ohio, in 1899. (see close up image of whiskey bottle). The slogans utilized by the company for “Brookfield Rye”  appearing on the whiskey bottle pictured in the sign, are also featured as the title of the advertisement in the bottom black border in Old English print; “Rare-Old-Perfect” “Brookfield Rye”. At the top “Made Famous By Public Favor” is also printed in Old English. (see image).

The sign was commissioned to be made by “The Meek Company” in Coshocton, Ohio. The old “Standard Advertising Co.”,  “The Novelty Co.”, and the “Tuscarora Co.” all merged in 1901 with Jasper Meek at the helm. His company became “The Meek Company” a short time later that same year. His knowledge and experience with stone lithography made him the most sought after quality advertising sign maker in the industry. Note the maker’s name and logo at the bottom right of the sign (see close up image). Jaspar Meek employed the best skilled artists he could find and had them move to Coshocton, Ohio to paint the images for his signs. One of those was “R. Fraundart”. Note his signature at the lower left of the sign (see image).

This example represents the best of the best, in that it is rare, beautiful, of outstanding quality and condition, and it is framed in a statement making handsome gilt period frame. It very well might have come directly from the Meek Company and displayed in their corporate offices.

*Note: See other outstanding tin advertising signs I have for sale.