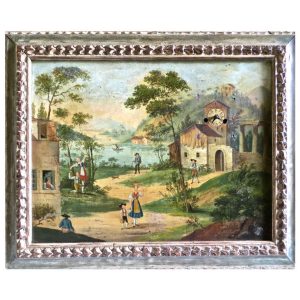 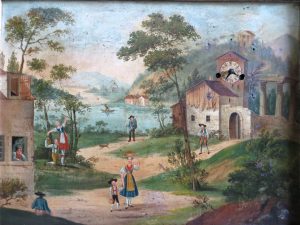 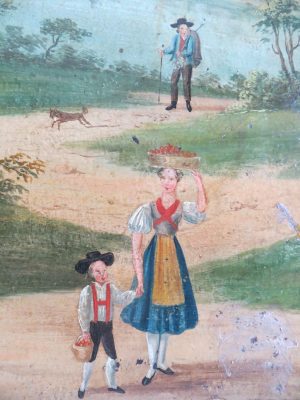 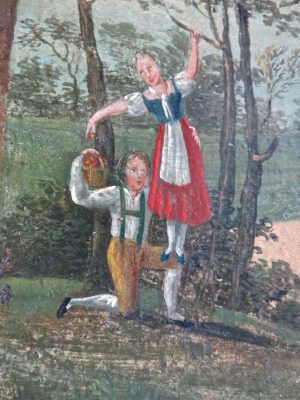 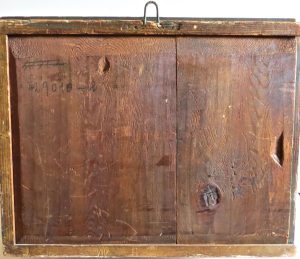 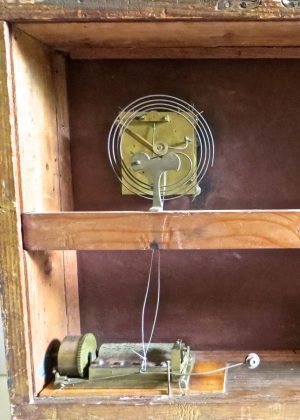 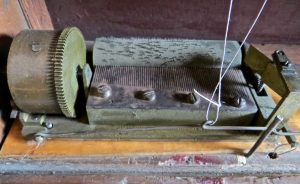 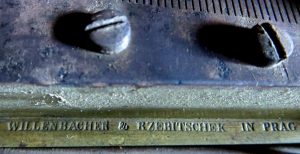 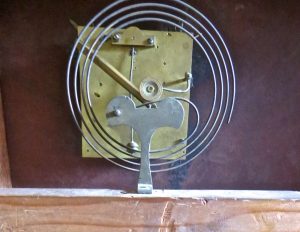 These painting clocks are very rare, especially containing the music box. Of Austrian manufacture circa 1820-1830, this Biedermeier picture (painting) clock is a naive and charming oil painting on metal, which depicts nine people dressed in colorful period clothes at various activities; a woman with her child and carrying fruit in a basket atop her head, two young lovers, a man in a boat, another man walking with his dog, while still another gentleman leaves the town hall. A woman at the window takes in all the local color and scenery, which consists of trees, shrubs, a lake in the background, and the town hall with a tower clock below the steeple. Classical ancient roman columns connect to the building, amidst surrounding mountains. The working clock is integrated into the tower on the painting.
The original frame consists of a nicely notched wood carved perimeter, repeated, with a concave divider. All is in original gold and green paint, as is the rear casing with exposed tendons.The musical cylinder and works is of excellent quality, which operates well playing two different songs.
The 30 hour key wind clock is operable, and has a rectangular brass movement with a short swing pendulum mechanism. There is a striking gong (second winding hole) which is inoperable. The dials are replaced. The clock is synchronized with the music box below. The music box plays and operates, once hourly, or by manually drawing on the string below; a song will play to completion. It is wound by winding the shaft on the lower right side of the case.
The condition of the painting is very good and all original except for a 1″ diameter antique touch up in the foreground scenic area; not noticeable to the naked eye, and barely visible under black light. The painting is untouched having never been cleaned and is appealing as such, but one might clean, depending on personal preference. The green paint around the perimeter case is completely original, as is the paint on the frame. Original imbedded hanging hook is at the top of case.
Two winding keys are included; one for the clock and one for the music box.
Dimensions: overall (with frame)= 23 1/4″ wide x 19″ high
actual painting= 18 3/4″ wide x 14 1/8″ high
Inscribed on music cylinder base: “Willenbacher & Rzebitschek In Prag”

Note: Germans have always dominated the region and wanted to move towards a unification process. Vienna and Prague have been linked together economically and politically for hundreds of years, and in 1806, at the end of the Holy Roman Empire, the Bohemian country of what is now known as the Czech Republic became part of the Austrian Empire. The Viennese looked down at the uneducated “Bohemians” and considered them lower class, and employed them as a source of cheap labor in industry. This may explain the “PRAG” marking on the music cylinder, indicating that the box was manufactured in Prague (“Prag” medieval spelling of the city), but made for the affluent residents of Vienna, as shown by the mountaineous scenery on the painting resembling Austria rather than the flatter terrain around Prague. Materials & Techniques Notes: Wood and metal