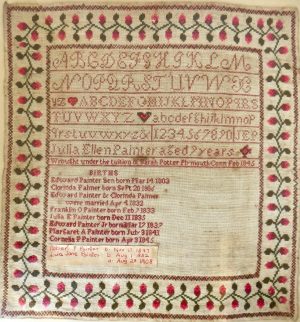 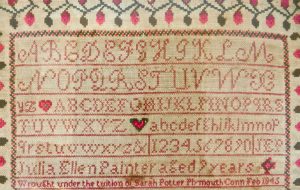 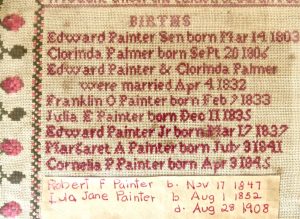 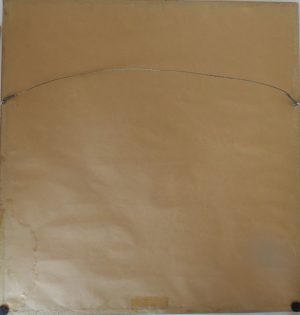 Lovely American Sampler with family register by “Julia Ellen Painter aged 9 Years Old” under the tutelage of “Sarah Potter Plymouth” with the date stitched “Feb 1845” which would make Julia’s birth “Dec. 11, 1835” as indicated in the needlepoint cross stitching list of family members births and a marriage. The raised needlework border is meticulously done in a green and red floral pattern connected with green branches; a uniform border in front of and behind the flowers circumvents the entire sampler on linen.

“Julia” has stitched the proverbial alphabet in script, block letters, and in lower case, along with the numbers 1 through 10; followed by her initials.

Later births and deaths have been neatly “taped in” and hand written; additional relatives as,
“Robert F. Painter b. Nov. 17 1847
Ida Jane Painter b. Aug. 1 1852
d. Aug 28 1908
This is a nice personal touch to an existing sampler which gives additional geneological information to the Painter family.

Historical reference:
Julia Painter (creator of this sampler) was born in 1835 in Litchfield, Connecticut. She had three sisters and two brothers and spent her formative years in Connecticut; there is a record of her living in New Haven, Connecticut at the age of 25 and it lists her as being a shirtmaker in 1860. At some point in time she went cross country, as it is noted that she died in Martinez, California in 1916 at the age of 81. Since this is where I located the sampler, that would indicate to me that she probably did not marry or have any children and more than likely had the sampler her entire life and made the addendums to it at the bottom.