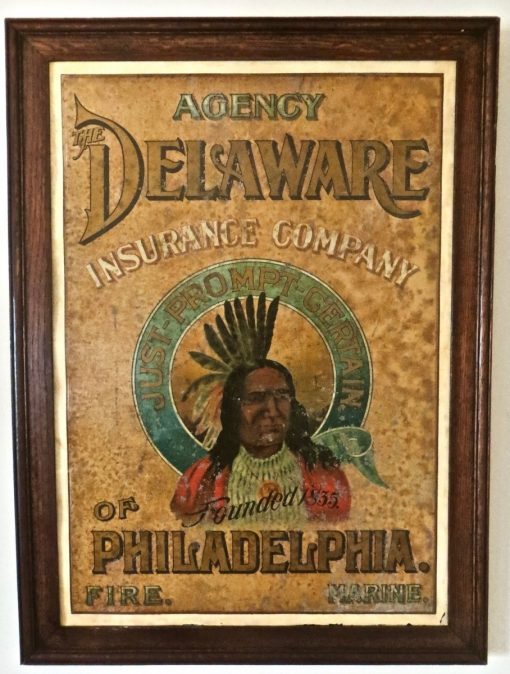 Advertising Tin Sign “The Delaware Insurance Company of Philadelphia” Circa 1885

Tin advertising signs were used in the late 19th and early 20th century and placed strategically in train stations, bars and saloons, general stores, and any place they would garner attention to their product; not unlike modern day billboards placed on highways.

This is a very RARE and early (circa 1885) tin advertising sign, commissioned by the Delaware Insurance Company, located and founded in Philadelphia in 1835. It was probably made by noted late 19th century sign maker, Sentenne & Green, of New York City, established in the 1870’s. With an Indian motif, the sign features a Native American Indian, front and center, decorated in a brown and green headdress; with red, cream and aqua clothing and a large gold medallion hanging from his neck. “Just”–“Prompt”–“Certain”, in prominent gold letters on a circular aqua background displays their motto; while gold, white, and aqua lettering on a light brownish background completes the decoration. “Fire” and “Marine” seemed to be the coverage sponsored by The Delaware Insurance Company.
They were located on 3rd Street and Walnut Street in Philadelphia (as noted in an archival reference I located from 1895).

The sign is mounted in it’s original deep grained oak frame; the paper backing has been replaced for conservation. The sign is in good original condition and there has been no touch up, repair, repaint, or restoration of any kind. The colors are bright albeit, there is a certain amount of pitting throughout the sign (see images), and the left border is a little “wavy”.

I have been dealing and collecting for over 40 years and never have seen this sign. It has been in my collection since 1998.
Because of it’s rarity and early date of manufacture, coupled with a Native American Indian theme, this example is a much sought after item by both advertising and Americana enthusiasts.

*Note: See other outstanding tin advertising signs I have for sale.