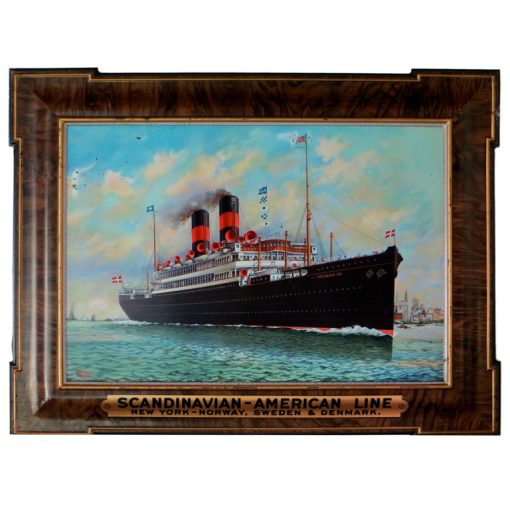 Advertising Self Framed Tin Sign for Steamship Company, circa 1920

This lithograph sign is self framed and made entirely of metal (tin). It is an advertisement for the Scandinavian–American Line which was founded in 1898 and disbanded in 1936. The steamship depicted, is the flagship liner for the company, “Frederick VIII” named after the King of Denmark from 1906-1912. It was a luxurious liner for that time and regularly sailed from New York to Copenhagen. Built in 1914 by a Germany company, it was sold for scrap metal in 1936.

The sign is American made having been manufactured by the “Passaic Metal Ware Co.” in Passaic, New Jersey. It was copied after a painting by “F.Worms” who was commissioned by the steamship company. He is ackowledged by signature in the lower left hand corner. There are other boats and city buildings in the harbor seen on the sign with the ocean liner.

The sign is in excellent all original condition with bright paint and no restoration or touch-up. The simulated wood frame is actually all tin and measures 41″ wide x 31″ high. The actual image is 31″ wide x 21″ high. There are a few paint loss marks
in the upper left hand portion of the sign (see the photo image of that specific area).