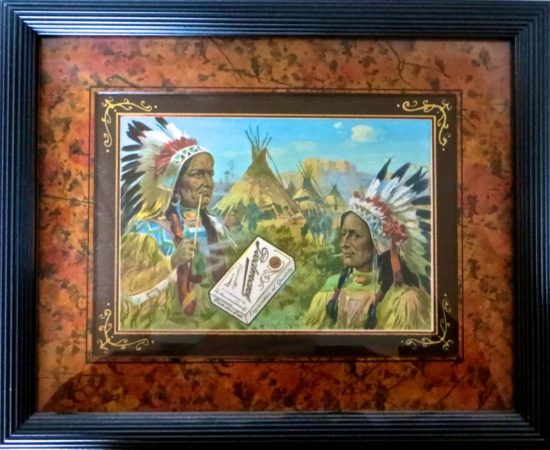 The American Tobacco Company was established in 1890 in North Carolina. In 1899 they purchased Ligget and Meyers Tobacco Company. In 1905, under the L & M name, they created Piedmont cigarettes. In 1911 the American Tobacco Company broke up into four companies with Piedmont Cigarettes continuing to be made by Ligget and Meyers. The famous T206 baseball cards, made famous by the Honus Wagner card, were placed in Piedmont Cigarettes at this time, and the packaging is almost identical to the packaging in this advertisement. Therefore this advertising is probably circa 1910. Tobacco was and still is an integral part of Native American spirituality, and Indians considered it a gift from the Creator. Because the tobacco crop was indigenous to the Americas, it was a natural that Native Americans would take up the practice of smoking, especially for ceremonial occasions, where Kinnikinnick (a mixture of several tobaccos) was smoked, shared, and enjoyed in a peace pipe. Thus the analogous and colorful images of Native Americans in this advertising, expressing and savoring the joys of smoking, with a pack of “Piedmont Cigarettes” in the fore ground. The paper or cardboard advertisement is double sided and framed so that both sides can be enjoyed.. On the reverse side is a short history of the American Indian using language and usage that would have only been prevalent at the turn of the century; with references to “rednecks” and “treacherous beings” . Those terms would have been unacceptable anytime later.

The framing is especially outstanding, with a high quality reeded black walnut one inch frame surrounding a double matte; a 1 1/2″ fruitwood looking matte, and a black embellished matte framing the image. The image is 5 1/4″ high x 7 3/4″ wide; the entire frame is 11″ high x 13 1/2″ wide
This rare and one of a kind sign is in excellent all original condition, and a unique two sided presentation.