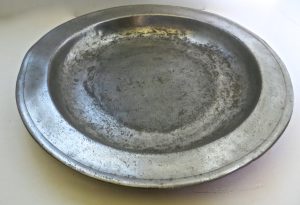 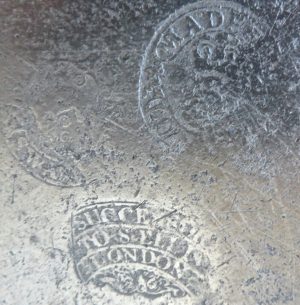 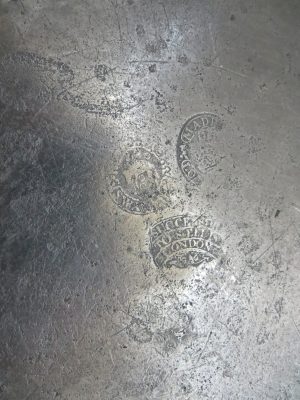 All original early 18th century pewter dish, hallmarked on the rear of the gently rounded bouge; three touchmarks are visible albeit not completely discernible. The most visible states “Succe_ _ _ _ To S. Elli London” with a floral horizontal logo pattern at the base. A second touch mark states “Made Lo_ _ _ _”; presumably London. Because pewter was a soft metal being an alloy of tin, copper, and/or lead, the touch marks were typically worn down so as to be indistinguishable. The pewter industry was not tightly controlled like gold and silver, thus, marks were often absent. In many instances, the maker of an item, in addition to the seller or retailer, each applied their own mark, thus accounting for multiple identification touch marks.
Their is a row of smaller hammer marks (done to strengthen the plate) on the back of the bouge, indicative of sadware pewter from the early part of the 18th century. The single cast reed overlay to the outer border of the broad rim is also an early 18th century design. The plate has particular warmth by it’s worn irregular circumference and natural well used surface patina. This particular dish dates from circa 1700-1730.
Dimensions: 14 1/2″ diameter x 1 5/8″ high